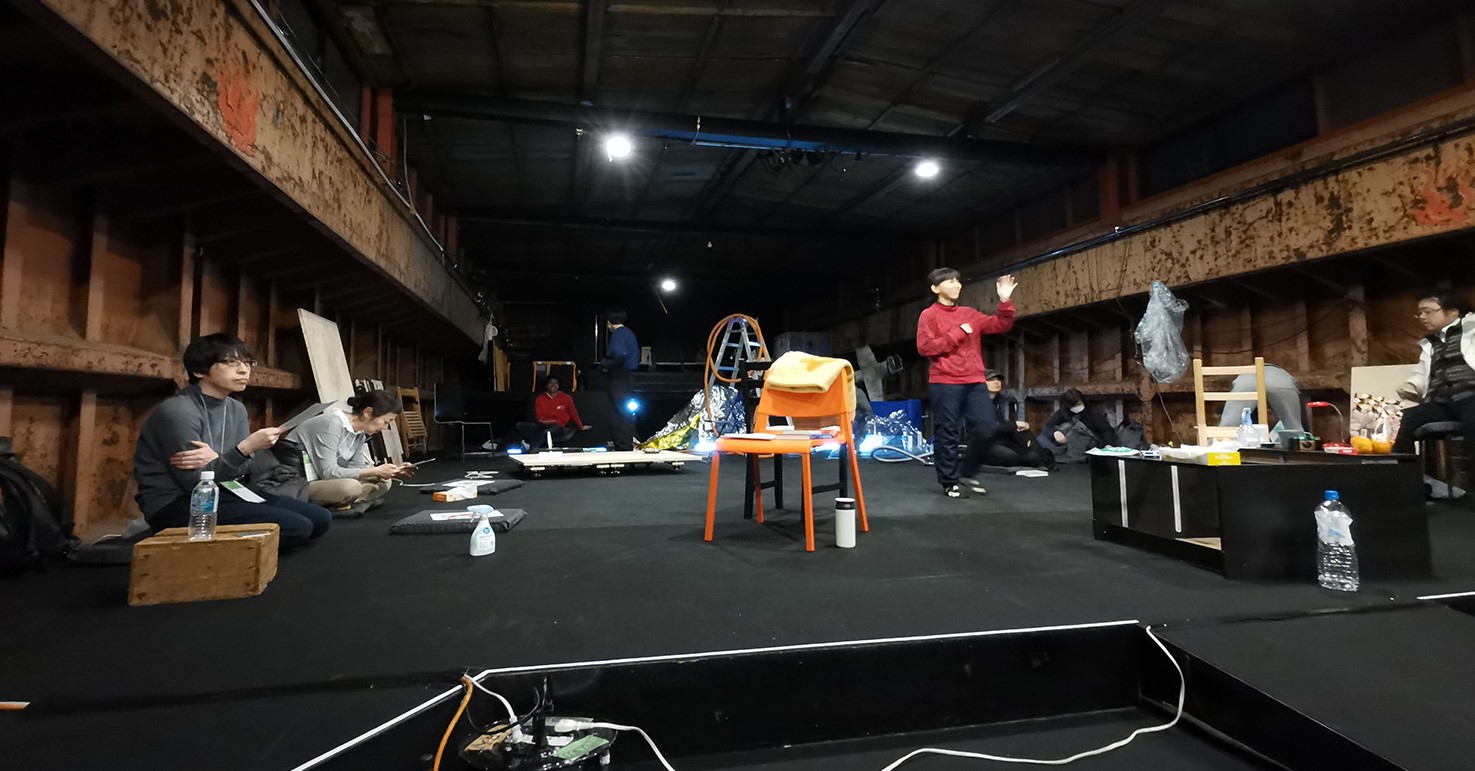 As part of their final year of training, students across discipline have the opportunity to curate their own internships with national and international practitioners and companies. As part of Whakawhiti Kōrero, we are interested to hear about some of the learning that occurred through these exchanges. Our first featured internship is from current third year acting student, Ben Ashby.

An Internship at the Tokyo Performing Arts Market.

In February 2020, I went to Japan for an internship at the Tokyo Performing Arts Meeting (TPAM). The international festival (with a focus on Asia)  runs for 10 days. It is based just south of Tokyo; in Yokohama. It is split into three streams, TPAM Fringe, TPAM Direction; a curated selection of about a dozen pieces from around the world, and TPAM Exchange, which is a series of networking events and presentations.  I was interning for Yukio Nitta, the producer running TPAM Exchange.

I wanted to come to Japan at this point in my training to get some rocket fuel for my artistry, and experience a culture of performance entirely new to me. I was particularly interested in the physical theatre produced in Japan. There are edges and angles not explored here in New Zealand, and something I came to realise was that having a massive population means opportunity to get very niche.

Even inside of TPAM there was an impressive variety of form, genre and content, and despite my best efforts (I went to 25 shows over about 15 days in Yokohama, Tokyo and Kyoto) I’m sure I only managed to get a few flavours of what is on offer. Tokyo is saturated with entertainment, if I didn’t have the festival to anchor me I would (quite literally) not have known where to start. Armed only with my highschool level Japanese I found it like a labyrinth; venues and bars and shops hidden in basements, down alleys or up skyscrapers most of which are impossible to find unless you know where you're going, and even then difficult. It’s this hotpot, maze-like quality, and the scale of the population, that I think breeds the ability to get wildly experimental in performance and gather very specific audiences.

The anachronism that infinite travel writers have pointed out, is that alongside this uber-modern exterior is a long and very visible depth of tradition. Inside the contemporary theatre scene, I could see artists embracing and combating the history of the various ancient Japanese theatre forms. There is a sense of tapu, and rigorous tikanga in many performances that I don’t see as much of in NZ theatre, definitely not in European - New Zealand theatre. I found myself leaving shows often feeling introspective, with a sense of weight, I think I’m more likely to leave a theatre in New Zealand feeling light or energised. However, the feeling I get of having a fire lit inside of me after watching great live art did not change at all with the form, content or country of origin.

I had forgotten how young New Zealand is as a country. There is a real sense of openness and irreverence in the NZ theatre scene that, I think, reflects our youth and our place as a sunny island far removed from most of the world. In a lot of the Japanese shows I saw there was a sense of seriousness - A feeling of kaitiakitanga towards the art they were making. A bigger interest in exploring working within tight rules and structures than I see here in New Zealand. Breaking the fourth wall felt like much more of an event. Of course, there was also lightness and irreverence in some performances in Japan, just as there are kiwi pieces that have that sense of gravitas. But from what I experienced, our two countries are on different sides of that particular scale. When I saw performances that did have that sense of a cheeky wink from the actor to the audience - it always reminded me of home.

During the working hours of my internship I spent more time with producers than performers, it opened my eyes to the sheer amount of time and manaakitanga it takes to curate an event like this. One of the goals of TPAM Exchange was for artists, producers and presenters to be able to meet each other and form genuine connections in a very short amount of time. It was fascinating to see how it is possible to get people to meet organically, in what has to be a highly timetabled and structured event. It’s an exercise in matchmaking, and in carefully creating spaces that encourage connections and then stepping back from them. ‘Networking’ feels like a cold and metallic word to me, But I saw at TPAM that the work in Networking is done in preparation for these big events. Mainly with the universal principles of; one - feeling warm and comfortable, and two - having some food and drink and an excuse to korero. I think that one of the secrets to Yukio Nitta and TPAM Exchange’s success is that once the event had started, for me, all that was necessary to ‘network’ well was to be present (in all senses of the word) at the events and ready to talk about my own art.

It was amazing to feel a sense of community created among these arts practitioners, from all over the world. I’m writing this reflection inside of the COVID-19 lockdown. The importance of community is present in my head more than ever. It is heartening to know that the village feeling I get from the New Zealand arts scene exists in an international context in a very similar way. However, I was very conscious of the importance of language in connection. I was lucky, English was the common denominator language of the festival. My Japanese did improve but never to the point of having a meaningful conversation about art. I am grateful to the many practitioners who were willing to speak to me about their art in my language, and I was often embarrassed at being so monolingual.

A couple of artists outside of the festival were also kind enough to meet with me during my time in Japan. This included the director Misaki Setoyama, who talked with me about her career inside big Tokyo stages, her love of community theatre, and her upcoming project working with elderly performers in the Saitama region. I also met Professor Minako Okamuro, who runs the Waseda University Theatre Museum. She sat down with me, a recently graduated set designer, and a film student for an hour and gave us an incredible overview of the state of contemporary performing arts in Japan. Canvassing things like the relatively new form ‘2.5 theatre’ which is a translation of manga onto the stage performed by ‘idol’ celebrities, and ‘Yowai’ or ‘Weak Theatre’ which is a genre I’m still getting my head around; it’s often made by young people who feel despair about the state of the world.  And it is closely linked with the hikikomori; adolescents and adults who almost completely withdraw from society and live life inside their bedrooms. I am itching to dig into this. I think it is an interesting contrast to the electric energy of protest and uprising that lives strongly in the art made by young people in Aotearoa.

I have a lot of people to thank that helped me make this journey possible. My time in Japan definitely gave me the fuel I was looking for, and much more. In particular I’m very grateful to Yukio Nitta, TPAM, Dr. Pascale Hatcher, Prof. Takako Takano and Jun Ohmae, and Fenn Gordon for their advice, connections, generosity and manaakitanga through this whole process. I’m very lucky to know, and have met so many wonderful and kind people in the performing arts.