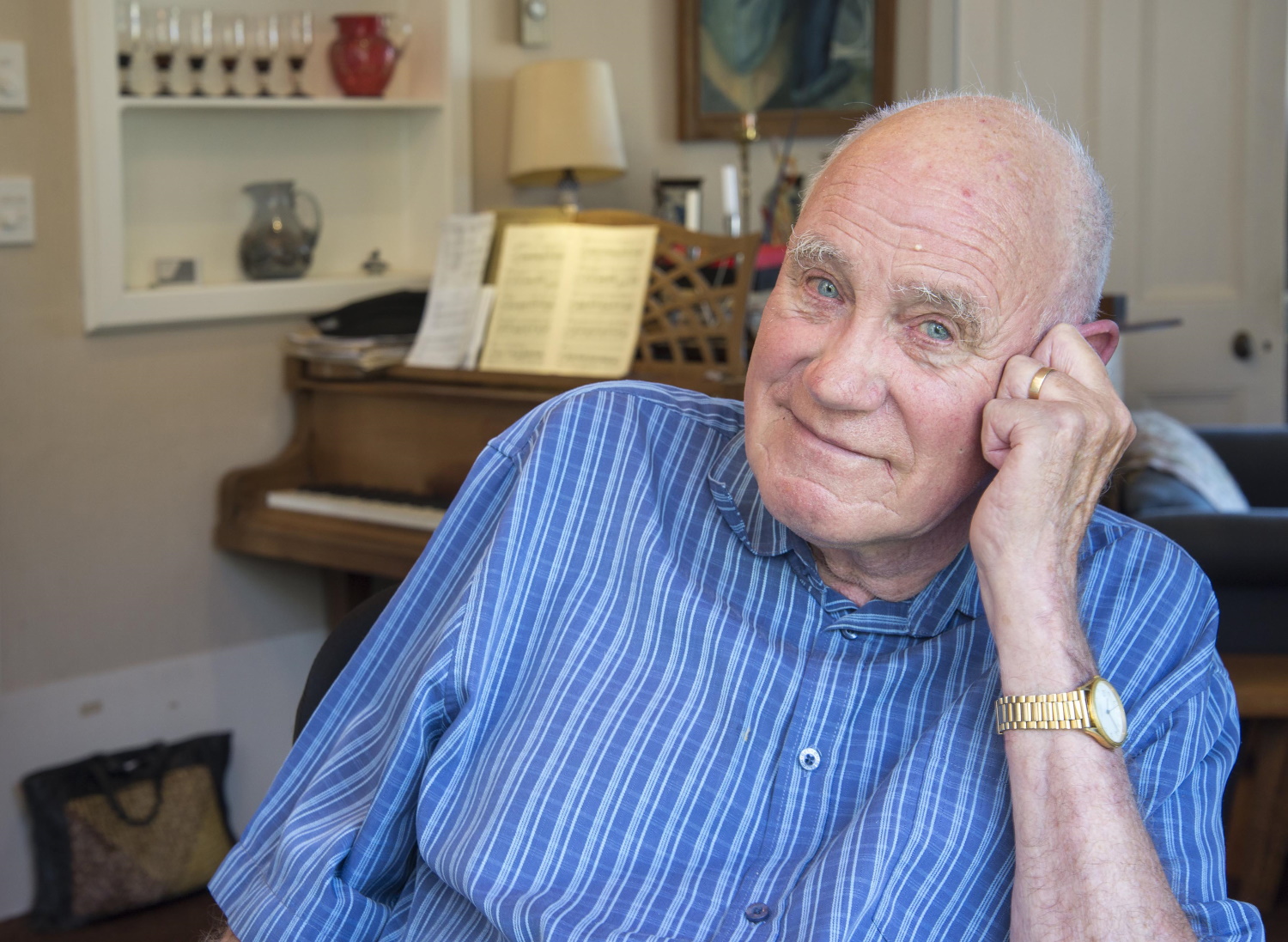 Laughton was already ensconced at Toi Whakaari when I arrived in early 1991. He was away on holiday so it was some weeks before I saw his magic in action. A quietly unassuming manner, and the slightest hesitancy of speech, I should have been warned by that permanent twinkle in his eye. Here was a magnificent Master of the Revels.

Laughton would move with speed into a room crowded with disaffected young adults. Like scrap paper in Wellington’s wind, sheaves of music were distributed, and with Laughton already on the piano the song of the day burst into the rafters. Apparently unconscious of how unreasonable his demands were, he obliged avowed Non Singers to scramble for support from Singers. Actually supremely conscious, he challenged each to work at the top of their game. If it is assumed you are going to cross the ice bridge over the precipice, you have little choice but to do it. The attendant adrenalin rush becomes your earned reward.

One graduate describes it like this, “Laughton knew how to get you to sing difficult duets even when singing wasn’t your way of expressing yourself.”

It never felt like he ‘taught’, rather that he ‘shared’ a slew of songs, and instrumental arrangements. Whoever could play 3 notes was conscripted into the orchestra. He made it seem effortless - and everyday - to master Elizabethan madrigals; new compositions in Te Reo Māori; Swing from the 1940s; Brechtian hymns;  musical comedy; ancient Greek chants and so on.

Whether he was Musical Director on a production, or leading what was effectively a choir, he introduced a bottomless range of musical styles to everyone. Acting, technical production students, teachers, directors, visitors. we all raced to get into his studio, and

EXPERIENCE the healing sound as we created a wall of music under his magical hands.

In the rehearsal room, whatever the production, he researched, wrote and arranged the perfect score for it - and here his demands for high standards were steely. Neither performer nor director were allowed to accept less.

Every single production was a standout,  but in my memory the melancholy harmonies of 2 men across the river in Caucasian Chalk Circle, and the measured discipline of 16th and 17th century songs - “Fortune my Foe”, “Drink to Me Only”,  “Greasy Joan”,  “Since First I Saw Your Face” - explode in my whole body.  A graduate responds, “But that’s the way Laughton taught us to sing, straight from the soul.”

We did a production of Aristophanes’ The Birds - in English, Greek and Māori. We translated many of the ancient Chorus parts and handed the lyrics to Laughton to set to music. He arrived back with them juxtaposed against well known popular bird songs - “Bye Bye Blackbird”, “Yellow Bird”.  That wicked twinkle yet again!

I believe he was brought into te kura by the inspirational Sunny Amey, a beloved ex-Director of Toi Whakaari. She had had a hand in training him at Teachers’ College, although it seems Laughton didn't originally plan to be a teacher. He flirted with, even actively pursued, several other possibilities before enrolling in the teacher training programme.
‍

THANK HEAVENS HE DID!!!
Because Laughton was born to be a teacher -
a wondrous teacher -
the epitome of a teacher.
‍

He inherited the revolution in education of that time. He used a system of respect, with thoughtful questions to unlock curiosity and the natural desire to learn in every child. Charmed by a large dose of playfulness, the learner was empowered, rather than intimidated.  Doesn’t this sound like a description of Laughton’s classes? “Hey Presto” we’re singing in four-part harmonies!!
‍

Laughton Pattrick was a force in Aotearoa’s Cosmos of Creativity, and he leaves an indelible mark:

Generations of youngsters were taught by him in primary schools, and in youth choirs in Wellington.

Generations of teachers were trained by him, when he was Head of Music at Wellington College of Education.

Generations of performances were enhanced by him in productions at Downstage, Capital E and numerous other theatres.

Those people now, from 10 to 100 years old, still ‘lift up their voices’ in full throated joy, creating walls of sound - a palace of joy.